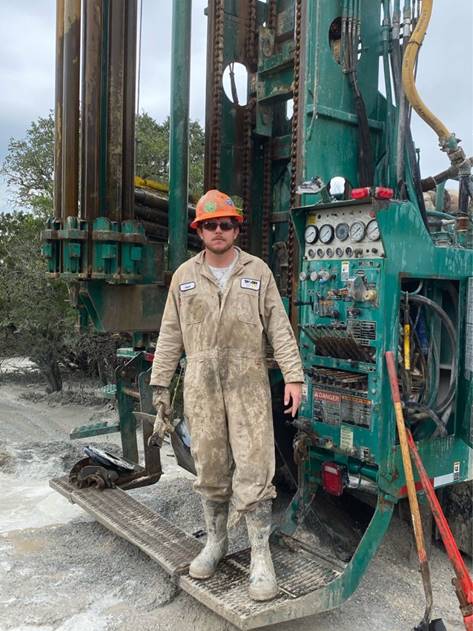 Upon review of nearby well logs, it became apparent that there was a high probability of encountering karst limestone. Karst is generally characterized as limestone containing channels and caves due to carbonate washout. This can be problematic for maintaining circulation of drilling fluids. Additionally, we found that the Upper Glen Rose portion of the Trinity would be about 550 feet below ground surface (ft bgs). In this area of Texas, the top of the Upper Glen Rose is indicated by a layer of gypsum. Gypsum is generally deleterious to water quality. We knew we would need to go well below the gypsum layer to ensure proper water quality.

Planning is imperative to a successful drilling project. Our primary drilling method was down the hole air hammer with foam additive. Foam was selected to stabilize the borehole in karst encounters and assist with cuttings removal through long water columns. Historical data indicated we could potentially have 500 feet of water column. This would require a minimum of 217 psi of air pressure at the bit face before any cuttings could be lifted out of the borehole. Foam allowed us to significantly reduce the air flow and pressure to lift cuttings out of the borehole.

When drilling began, we hit a shallow porous sand zone underlain by a layer of clay. When our hammer hit this material, its effectiveness was extremely limited. The driller responded with a bottom hole assembly which included a 6-inch pilot bit with a hole opener out to 8 inches. The purpose of this bit is to maintain a plumb borehole through channels which can cause drill tooling to deviate from center. This tooling was successfully used to drill to 500 feet in 2 days. The next morning static water was at 300 ft bgs, thus the driller mixed his foam slurry and drilled to the terminal depth of 770 ft bgs. The foam allowed successful cuttings removal to total depth despite a long water column.

The following day, the borehole was reamed, in one pass, to a final diameter of 9 7/8 inches and wireline logged pursuant to Edwards Aquifer requirements. After this challenging hole was drilled, the “easy” work started. We ran casing and sealed the well, including cementing the gypsum layer that was encountered between 559-560 ft bgs. The well was developed by air lifting for 2 days, followed by 2 days of pump development.

In an effort to ensure that this homeowner’s water is protected in another severe winter weather event, we installed a pump house (hoist removable) to contain the well head, above grade jet pump, pressure tank, and associated fittings and parts. The pump house contains the equipment, protecting them from the elements, and allows easy access to work on the well, ensuring a long service life.