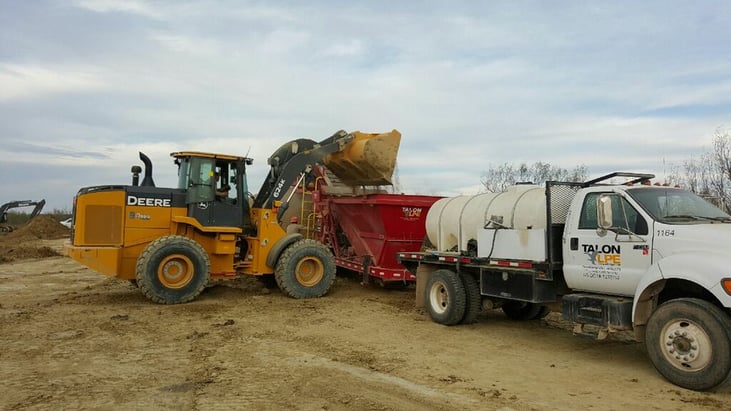 Over the course of a month, Talon/LPE utilized a Royer Model 364 soil shredding machine which pulverized the impacted soil increasing the surface area of the soil and allowing maximum volatilization of the hydrocarbons. Additionally, while shredding the impacted soils, Talon/LPE applied a solution to chemically oxidize the hydrocarbons. Following the remediation, Talon/LPE collected confirmation samples to determine if the soil had met the remediation goals. After passing regulatory limits, the remediated soil was used to backfill the excavation instead of bringing in new soil. Following the completion of the project, the client received closure on the site from the regulatory agency.

By not going the traditional route of "dig and haul," the client eliminated the costs associated with truck transportation, landfill fees, and backfill material. The client also avoided the risks and liability associated with transportation of contaminated soil on public roadways and leaving the soil at a landfill permanently. Additionally, soil shredding is more environmentally friendly since impacted soils are not being disposed at a landfill.

Talon/LPE calculated a cost comparison of "dig and haul" versus soil shredding. The total cost for disposal of the impacted soil at a landfill, including costs for transporting the impacted soil and importing clean fill for the excavation, was calculated to be approximately $327,000. The total cost for remediating the soil through soil shredding and backfilling the excavation with the remediated soil was approximately $184,000. In total, the client saved $142,000 by utilizing soil shredding instead of the traditional "dig and haul" approach, which is a total savings of approximately 43%, or 56% on a per cubic yard basis.

Contact Talon/LPE to discuss how soil shredding can save you money on your next remediation project or to get more detailed information.