The prolonged drought West Texas has seen over the past few years has had a negative affect on the Ogallala Aquifer. Today, the Aquifer is at record lows.

Drought cycles are a part of life in West Texas. However, the drought that started in late 2010 is one of the most persistent on record. The problem began when a La Niña began to develop in the Pacific Ocean. This changed weather patterns over much of North America. It significantly dropped the amount of precipitation seen over the southern part of the U.S. While the La Niña abated in 2012, rain levels have not returned to normal. This has prolonged the drought situation.

How Do Drought Conditions Affect The Aquifer? 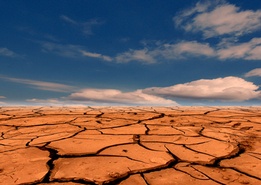 The Ogallala Aquifer is an underground reservoir for water that has percolated down into it over thousands of years. It took thousands of years for it to fill to pre-20th century levels. In average years, rainfall replenished the Aquifer at a rate of about 1 inch per year. In drought years, the replenishment is minimal or non-existent.

These days, the Aquifer is being stressed by the amount of water being drawn out of it by farmers to irrigate crops. With the drought in place, farmers are depending more and more on the Ogallala to keep their crops alive. The increased rate of irrigation has drained it even faster than in years past.

Between 2012 and 2013, wells in West Texas that tap the Aquifer dropped an average of 1.87 feet. That is only slightly better than the drop of 2.5 feet between 2011 and 2012. Some areas are suffering worse than others with some wells dropping almost 20 feet in a single season.

This is on top of a significant drop in Aquifer levels between 2001 and 2009. In just 9 years, the amount of water extracted equaled about 32 percent of the amount extracted during the entire 20th century.

What Does This Mean Long Term?

While some forecasts say the winter of 2014 should have good rainfall due to an El Niño setting in, that does not mean the stress on the Ogallala Aquifer will improve. The Aquifer under West Texas is already at record lows. Some areas of the Aquifer are almost completely drained. Other areas are approaching those levels. The future of the Ogallala in West Texas is uncertain.

If you’re in need of environmental drilling services in Texas, give us a call here at Talon/LPE Drilling Services. We have decades of experience throughout the state.