HISTORY OF THE OGALLALA AQUIFER AND ITS CURRENT STATE

The Ogallala Aquifer is a shallow table aquifer that sits under eight states ranging from South Dakota south to Texas and New Mexico. It is a major source of irrigation water throughout the region.

Formation of the Ogallala Aquifer 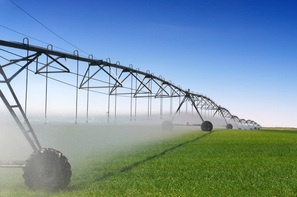 Before the Aquifer formed, the land now known as the Great Plains looked nothing like it does now. It was a land of low hills, shallow valleys, and meandering streams. East-bound streams coming down from the Rockies began depositing sand, gravel, silt, and clay into the valleys and streams. Over millions of years, the sediment filled and covered the dips and slopes of the land, forming the flat land now known as the Great Plains.

The porous sediment layers in these ancient valleys form the Ogallala Aquifer. Underground water moves from the northwest towards the southeast as water comes down from the Rockies and sinks down into the sediment layers.

Man's Use Of The Ogallala Aquifer

The early 1900s saw the first uses of the Ogallala's ancient waters for irrigation. The amount drawn from the Aquifer was minimal up until the 1930s.

A series of droughts in the 1930s changed it. Vast areas of cultivated land saw very little rain. The soil uncovered by cultivation became dry and friable. As the winds came, the soil became airborne, creating the infamous storms of the Dust Bowl.

To keep farmers on these fertile lands, the federal government began subsidizing irrigation projects. Improved drilling technologies plus subsidization prompted the development of vast tracks of farmland, all dependent on water from the Aquifer.

Unfortunately, all the pumping from the Aquifer has had a negative impact. Since about 1950, the amount of water in the Aquifer has dropped by nine percent. Depletion of water levels is only increasing with two percent lost between 2001 and 2009.

Because of over pumping the Aquifer, many areas of the High Plains have literally run out of water. The Texas Panhandle has seen the largest drop in Aquifer levels. Some areas have returned to the dry arid land that it once was.

Improved irrigation technology and increased energy costs have caused the rate of pumping to decline in recent years. However, drought conditions throughout the High Plains has increased pressure on the Aquifer  to sustain current crop levels. The debate on how to solve the problem continues.

If you need help drilling a well, contact the experts at Talon/LPE.