History Of The Hueco-Mesilla Bolson Aquifer

At the far western tip of Texas lies the Hueco-Mesilla Bolson Aquifer, sitting along the Texas-Mexico border. It lies under most of El Paso County and a small part of Hudspeth County. The Aquifer stretches north into New Mexico and southwest under the Rio Bravo into Mexico.

The Hueco and Mesilla are separate basin-fill (bolson) deposits on either side of the Franklin Mountains. The Hueco sits on the east side of the mountains with the Mesilla sitting to the west. The separate bolsons join together at the southern end of the Franklin Mountain range. The bolsons have layers of silt, clay, sand, and gravel to filter and hold the water in the Aquifer.

While the Hueco goes down about 9,000 feet in depth, the bottom layers are clay and silt. This leaves only the top sandy layers as the source of usable water. Those layers only go down to several hundred feet.

Who Uses The Hueco-Mesilla Bolson Aquifer? 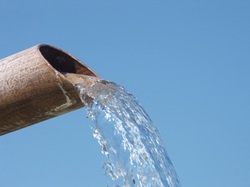 The Hueco Bolson is the main water source for both El Paso in Texas and Ciudad Juarez in the Mexican state of Chihuahua. Eighty-seven percent of the water removed from the Aquifer is for municipal use in these cities and the surrounding communities.

Heavy Aquifer pumping during the 20th century has resulted in a significant lowering of water levels in most of the Hueco and some of the Mesilla. This is especially true in the downtown pumping fields in both El Paso and Ciudad Juarez. As a result, the quality of water being drawn from the Aquifer is decreasing as the amount of concentrated solids increase. Some top soil subsidence has also happened due to lowered water levels.

What Are The Water Levels Like In The Aquifer?

Water coming down off the Franklin mountains as well as water flowing through the Rio Bravo are the main sources of natural Aquifer recharge. Since the 1990s, treated wastewater from El Paso has been pumped into the Bolson to help improve recharge levels.

Over the past few decades, the water authorities in El Paso have taken steps to reduce pumping. This includes using surface water sources and using pumped water more efficiently. Another option is mixing water with some salinity with high-quality water that has very low levels of salinity to create drinkable water.

The Hueco-Mesilla Bolson Aquifer is under great stress at this point, based on the growing populations of El Paso/Ciudad Juarez and the decades of overpumping. Smarter use of water has reduced the need for pumping the Aquifer, but not to a safe level.

Pumping projects in the Aquifer require trained teams that know where and how to drill. If you need environmental drilling services in Texas or New Mexico, give us a call here at Talon/LPE Drilling Services.