A Brief History of Unmanned Aerial Vehicles aka Drones

Do you know the date the first commercial drone was launched? If you said unmanned aerial vehicles (UAV) were first used in the 1970s-1980s, you were off by about 200 years.

In 1782, the Montgolfier brothers in France were the first to experiment with balloons using unmanned aerostats before going up themselves. UAVs were then used as a tactic of war starting on August 22, 1849, when the Austrians attacked the Italian city of Venice with unmanned balloons loaded with explosives.

During World War I the Ruston Proctor Aerial Target of 1916 was the first pilotless aircraft built using A. M. Low’s radio control techniques. 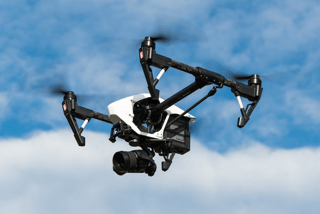 A note on the term “drone”

Before getting into more modern history on a light note, in May 2015 the Drone-Industry Show accepted the use of the word “drone” in place of “unmanned aerial vehicles”. Company representatives and government employees shunned the term because they thought that the word didn’t convey the vehicles’ sophistication.

“We’re not afraid to use that word anymore,” said Kathleen Swain, chief pilot for the drone program of United Services Automobile Association, a provider of insurance for military families. “Everybody knows a drone is a drone.”

In fact, when USAA received positive news from the Federal Aviation Administration in April 2015 about using unmanned aircraft for damage inspections, the company announced on its website, ‘FAA Approves Drone Petition.’

Drones are tools used to collect data in many cases more efficiently and frequently than other methods.

Back to the history lesson

In the 1970s and 1980s a variety of new technologies emerged, including the Global Positioning System, long-range data links, lightweight computer equipment and composite materials, as well as satellite communications and digital flight controls, that spawned a new generation of drones.

This was not just great for weekend radio-control flyers, but useful in industries as diverse as aerial photos for media, environment management, security surveillance, and agriculture.

The FAA steps in

With the friendly skies being infiltrated with toy drone enthusiasts, news drones, industrial spies, and larger flying objects, it became necessary for the Federal Aviation Administration (FAA) to regulate the new technology aloft.

"The rule will be in place within the year," FAA Deputy Administrator Michael Whitaker said at the House Oversight Committee hearing, "hopefully before June 17, 2016."

While the FAA has previously said it was seeking to complete the rule as swiftly as possible, Whitaker’s comments are the most specific yet about timing.

Meanwhile, the Alaska Certificate of Waiver or Authorization was followed by 990 FAA exemptions by July 2015 with more than 60 granted to Texas companies and individuals.

In fact from April to July 2015, a number of exemptions soared 90%. In June alone, the FAA granted authorizations for commercial unmanned aircraft system in 42 states and Puerto Rico – a total of 714 in one month.

By July 2015, the issuance of permits was about 250 a month while the FAA reviews over 4,500 public comments on the proposed rules.

Talon/LPE submitted our request for our Section 333 grant of exemption in July 2015.  We are hopeful the exemption will be granted by early October 2015, or sooner.

The future of drones

The next five years are going to be big for drones in the commercial sector. A few projections include enhanced usage in agriculture, oil rigs and wind farms, mining, and bridges.

By 2019, drones will be doing more in delivering and transporting services.

The future of unmanned aerial vehicles in industry is assured. It’s time to think about how using a drone can help your business.