A BACKGROUND OF THE BLAINE AQUIFER OF TEXAS

Located in West-Central Texas, the Blaine Aquifer provides water to nine counties. It also extends into southwestern Oklahoma, where it supplies Jackson, Greer, Harmon, and Beckham counties. It is primarily used to provide water for livestock and residential use, but it is also used for irrigation, municipal supply, and industrial purposes. The aquifer is located within the Blaine Formation, a 250 million-year-old geological structure that holds water in saturated channels. It also overlaps with the Red River Basin. Historically, the aquifer was known as the "Blaine Gypsum Aquifer" or the "Dog Creek-Blaine Aquifer." The aquifer as a whole spans 3,500 square miles. 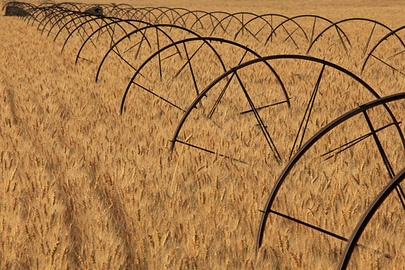 The Blaine Formation and Aquifer are made up of layers of marine and non-marine sediments, deposited on the site of a shallow sea that once covered much of the southwestern United States. The main minerals that make up the aquifer are gypsum, anhydrite, dolomite, salt, and silty shale. Most of the aquifer is less than 400 feet thick; the portions that are saturated with water rarely exceed 300 feet in thickness, while those saturated with fresh water average 137 feet.

Due to the presence of large quantities of salt in the Blaine Formation, the aquifer's water is highly saline, ranging from 2,000 to 6,000 milligrams of total dissolved solids for each liter of water. Because the water is so saline, it must be treated before humans can safely consume it. Only salt-resistant crops can be irrigated with this water. The water also contains between 1,000 and 2,000 milligrams of sulfate per liter; untreated water with this much sulfate can cause diarrhea. Other minerals found in this water include magnesium, calcium, and chloride.

The Blaine Aquifer gets much of its water from precipitation, receiving between 20 and 24 inches in average annual rainfall; about six percent of this water finds its way into the aquifer. Because much of it is composed of shale, the aquifer has poor permeability, and tends to confine water to individual sinkholes, cavities, and beds. Well yields in this aquifer usually range from 100 to 500 gallons per minute, though they have been as high as 1,500 in Texas and 2,500 in Oklahoma. In 1985, the aquifer produced 24 million gallons of water per day, 30 percent of which was drilled in Texas and 70 percent in Oklahoma.

The aquifer has not experienced any long-term water level declines except in areas that are dependent on it for irrigation.

Are you interested in drilling for water in the Blaine Aquifer? Talon/LPE Drilling Services offers a wide range of safe, affordable drilling operations throughout Texas, New Mexico and Oklahoma. We specialize in hollow stem auger drilling, mud and air rotary drilling, and soil boring. For more information, contact us today.